Mondays With Mike: Author Robyn Gioia and the Thanksgiving Controversy 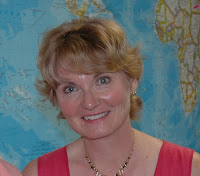 SEVERAL YEARS AGO when I was trying to sell my first book, I met another struggling author in an on-line mystery group, her name was Robyn Gioia. Her first book was a young adult mystery Rinny and The Trail of Clues, it did well and she has since gone on to create an eclectic body of writing, including a young person’s history guide that challenges the traditional notion that the Pilgrims created the first Thanksgiving in New England. Originally from Ohio, Robyn has Masters Degree in Educational Psychology with an emphasis in gifted education and has taught Junior College down to elementary school. She currently teaches a class of really bright fifth graders in Florida.
Mike: Thank you for being with us today, Robyn. I want to get right into your most controversial work, America’s REAL First Thanksgiving, St. Augustine, Florida, September 8, 1565. That is a pretty controversial title. When it was featured on the front page of the USA Today Life section, a lot of people accused you of trying to rewrite history. Why did you pick such a controversial subject to write about?
Robyn: Because this little known fact was unearthed fifty years ago and it’s still a well kept secret in our country today. As a teacher and author, I wanted to shed light on the subject, and if you teach the kids, they grow up knowing the facts. That’s why I wrote a middle-school, history picture book about the events surrounding the real first Thanksgiving, an event that took place between the Spanish and the Timucua in Florida 55 years before the Pilgrims.
M: Can you give us a short summary of the book?
R: 56 years before the Pilgrims celebrated Thanksgiving in New England, Spanish explorer Pedro Menéndez arrived on the coast of Florida and founded the first North American city, St. Augustine. On September 8, 1565, the Spanish and the native Timucua celebrated with a feast of Thanksgiving. The book takes the reader on a comprehensive journey to the founding of America’s oldest city and the meal that marks the nation’s real first Thanksgiving. To quote Dr. Michael Gannon of the University of Florida, the historian who showed the world that St. Augustine was the real site of the first holiday, “In the year 1621 when the Pilgrims were having their first Thanksgiving, St. Augustine was up for urban renewal.”
The book has been vetted by the University of Florida, and Dr. John McGrath of Boston University, a History Channel commentator.
M: Did you have trouble finding a publisher? 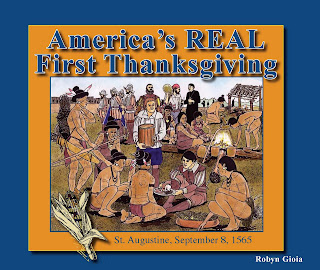 R: Pineapple Press, a well-established, Florida publisher, with an excellent reputation, was very interested in the book. When I submitted the manuscript, I thought I was done. Then the publisher asked what I was going to do for pictures! That was something I hadn’t counted on. It took me over nine months to hunt down all the historical pictures. It was a real learning experience; one I wouldn’t trade for the world. The book is gorgeous, and I’m really proud of the finished product. I used it this year in social studies, and the kids were fascinated. I included a section on the Timucua Indians, a now extinct tribe, and the illustration of Chief Outina captures everyone’s imagination. Outina use to paint his skin red, and sharpen his fingernails to a point, so they resembled an animal’s.
M: What age group are we talking about?
R: The interest level ranges from ten to adult.
M: How did you become interested in writing? I know we’ve been cyber writing friends for over a decade, and we’ve seen many things come and go in the writing world.
R: I use to dabble with writing when I was a kid. I started my first novel when I was in fourth grade. Of course I didn’t finish it, but the bug was there. Then I became a teacher and my time was consumed with teaching. Then my husband’s job took us overseas to England. It was the first time that I wasn’t in the work force and was able to do other things. I had always loved writing and when the opportunity came up to join a novel writing group of eclectic writers, I took it. It was the best thing in the world for a writer. The English are very honest people and they push you to become better. They aren’t hung up on protecting your ego. Their philosophy is that honest feedback allows you to grow and become stronger and that you have to be mature enough and confident enough to handle it. If I have developed any skills at all, it’s because of their patience and support. The first time they critiqued me, I shut down writing for two months. Then I toughened up and stuck my toe in the water again. I haven’t looked back since.
﻿﻿﻿
﻿﻿﻿

M: Tell me about your other books.
R: My first novel, Rinny and The Trail of Clues (now out of print) won the Benjamin Franklin Silver Award for Best New Children’s Voice and First Place in the Royal Palm Awards. A couple of years ago, I decided to have some fun with the storyline and turned it into a fantasy. It features two brainy sleuths, Bell, a sixth grade girl, and her best friend Temple Black, a boy that has come back from the dead as a ghost. The Ghost, the Rat and Me is about a girl, Bell, who wanted to be sixth-grade president, but got a dead rat, a clue, and a blast from the past instead.
When I rewrote the book this time, I was part of a Jacksonville critique group which we have affectionately named the MOJO group. They read every word and brought me to task as only passionate writers can. I have decided to join the modern world of publishing and have submitted it to a Canadian EBook publisher for consideration. I am currently waiting to hear from then. When it becomes available, (from whomever) I will be posting it on my website.
On another note, I am in the middle of turning a historical novel I wrote during the summer into a graphic novel. It’s about the 1702 siege of the Castillo San Marcos, the fort that defended St. Augustine against the English attack. Pineapple Press is interested in that novel once the artist (Carolyn Fleetwood) and I have finished. The historical facts surrounding that time in history reads like a Hollywood movie and was easy to write. Plus I have a science picture book on Photosynthesis that I am submitting too. As you can see, I am a very eclectic writer!
M: When do you find time to write?
R: One word. Summer! When most teachers are lying back, I am slaving away at my computer. Teaching consumes me during the school year, so I have to wait until I have a mental break. Then I enter the wonderful world of writing. I always have these lofty goals that I don’t reach because school starts again, but that’s okay. I keep plugging away.
M: Besides writing, do you have any other hobbies?
R: I hike when I get the chance. Three years ago I hiked to the bottom of the Grand Canyon. I stumbled into the camp at the bottom of the canyon like one of those old men in the cartoons crawling on their hands and knees back to civilization, but I made it! I also love to travel and to learn. I am always taking courses.
M: Thank you for taking your time with us and good luck with your new projects.
R: Thank you very much for having me! I enjoyed sharing time with you and your audience.
You can contact Robyn through her website. Her books can be purchased here:
Amazon
America's Real First Thanksgiving

Target
Posted by Mike Manno at 6:05 AM