Let’s salute our veterans … think of where we might be without them! 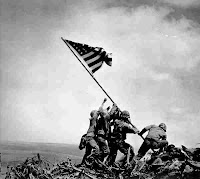 I MUST ADMIT my own military career was cut short … the Vietnam War was winding down and the Army had an abundance of junior officers so those with only reserve commissions were being eased out in favor of the regular Army types.  I like to tell people that we were fighting a war and wanted to win and the Army thought it had a better chance to do that without me.  For me, the worst part of being a vet is that over the years my uniform has shrunk!  I think it is because the closet it is stored in is not ventilated properly.  Ya think?  Anyway, today is the time to thank those who have served (longer than I); think of where we might be today without our heroes in uniform.  Thanks guys, and gals, and, of course, your families.
Posted by Mike Manno at 6:47 AM