VIPER: Why are the living in the Book of the Dead? 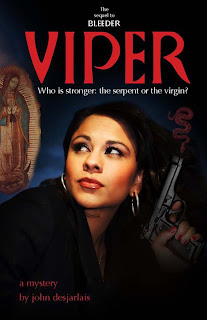 I JUST FINISHED reading an advance copy of my friend John Desjarlias’ new thriller VIPER, a don’t miss it page-turner, which will be released this March. VIPER is a blend of ancient Aztec mysticism, Catholic Mariology, and a good old-fashion whodunit. The story follows a former DEA agent, Selena De La Cruz, haunted by a young girl’s shooting that ended her career, whose name shows up on a list of the dead for All Soul’s Day. Selena, as it turns out, is not the only living person on the list, and as – one by one – the others are killed, the “Book of the Dead” appears more of a hit-list than a religious exercise.
Selena, who is now an insurance agent, is paired with her former DEA pals and a local cop to locate the killer, thought to be a high profile drug dealer she helped put in prison years ago who goes by the name The Snake. Each of the persons named on the list had some dealings with The Snake. Selena races to find La Serpiente while a young visionary, speaking on behalf of an unseen Blue Lady, announces each death in advance. Selena’s name is now next on the list!
VIPER is a great sequel to John’s earlier novel, BLEEDER. However, familiarity with BLEEDER is not a prerequisite to enjoy VIPER. Look for VIPER this spring from Sophia Institute Press. You can check out John’s website here.