Wow. What can I say?
The world of ebooks is advancing like a tsunami. When ebooks first appeared on the horizon back in the 90s, authors had high hopes. But ebooks didn’t quite take off like people thought. A friend of mine, who was a vampire author long before it became the trend, landed a three ebook contract with a cyber publisher known for quality reads. Unfortunately, my friend’s books were never published because the company closed. Seems no one was purchasing ebooks. I’m not saying quality books were not available, but Ebooks eventually evolved into a backdoor for authors who couldn’t get in the front door of publishing. It also became the portal for no-so-good writers. But things are changing, and the publishing industry has been turned upside down because of the muscle coming from the digital world.

As an author, I have always been partial to paper bound books. I admit it. I’m a snob. Who doesn’t love the feel of a book hot off the press, or the musty smell of an old tattered favorite? Six months ago, I would have scoffed at anyone touting ebooks over the real deal. Then I started paying attention to the chatter on my FB page. Agents were placing books with ebook publishers and well known editors were losing their jobs at the major houses because bound book sales had dropped off. But the most important announcement of all was coming from the paper bound publishers themselves. The “big boys” were opening their own ebook imprints! Instead of shunning the digital age, they decided to embrace the inevitable.

Then an author friend shows up at our critique group with a brand new Kindle, Amazon’s brand name ebook reader. Seems his wife bought it for him. Not being an author herself, she didn’t realize it was traitorous for a paper bound author to own such a thing. Of course he passed it around, where each of us had the chance to examine it with a skeptical eye. The screen was comfortable to read. They had fixed the back lighting problem of earlier readers. The text could be set to different sizes. It remembered where you stopped reading. The dictionary feature provided definitions of words you didn’t know. Highlighting passages was easy and so was taking notes. And it was incredibly comfortable and lightweight to hold. Trying to appear neutral in our approval, we asked the question on each of our minds. Do you like it? He didn’t hesitate to answer. “I love it.” It was then that I realized ebooks had finally arrived.
When I left my critique group that night, I walked away with a totally different attitude. I was no longer a snob. I realized there is room in this world for both paper bound books, and digital ebooks. It wasn’t one verses the other. It was a matter of convenience and preference. Authors need not fear. The digital world has created another portal for the written word.
* * * * * 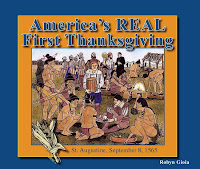 Robyn Gioia is the author of, America’s REAL First Thanksgiving, St. Augustine, Florida, September 8, 1565, a controversial, middle-school history book featured on the front page of the USA Today Life Section. She is currently tweaking her middle-grade novel, The Ghost, The Rat and Me, for an ebook publisher.
Posted by Mike Manno at 8:20 AM