Mondays With Mike: The dying declaration and the hearsay rule

I CONTINUE TO read many otherwise well-written mysteries that contain a legal flaw or two. No one minds that authors stretch things a bit in the interest of writing a good story, but those stretches must at least be within the bounds of reality. Nothing is more important to a crime writer than proper research: your weapon caliber must do in real life what you say it does in your story; your legal procedure must be correct; you must have a working knowledge of poisons if you are using that as a cause of death.
A year or so ago I had the occasion to address some of the problems in the context of the “dying declaration.” Many writers use the declaration to do many things that it legally cannot do, so while I’m lining up some new author interviews, I thought you might like to take a peek at something you may have missed:
*****
RESEARCH, RESEARCH, RESEARCH is a mantra that writers hear all the time but sometimes ignore. I was at a conference the other day when one of the speakers was commenting on the pope’s environmental statement. At a papal Mass, Benedict gave a homily extolling the virtues of the environment. The reporter covering it noted that the pontiff so wanted to underscore his position that he even wore green vestments!
Well, as any Catholic would tell you, the color of the vestments worn at Mass are dictated by the liturgical season (Christmas, Lent, etc.) or the specific feast day, not the particular message the priest wants to give. Green is the most often used color which denotes “Ordinary Time,” in other words, nothing special that day on the Church calendar.
I’m also reminded of the film Kramer v. Kramer where Dustin Hoffman played the role of a father trying to win custody of his son. He was insistent that his son, Billy, not be involved in any of the court hearings. After the judge granted custody to the mother, dad wanted to appeal. The response by his lawyer was something to the effect that if he appeals it will be necessary to call Billy as a witness. Now as anyone who has taken business law knows, there are no witnesses in an appellate court, those courts rule on a written record and oral arguments by lawyers.
And, of course, we have all heard the stories of authors who get razzed by readers because they have a car traveling the wrong way on a one-way street, or is a four-door model when the company only produced a two-door.
So I am not surprised when I see writers missing the point concerning rules of evidence, especially that rule known as the “dying declaration.”
There is much confusion about what this means, so here is a small primer. The rule is actually one of the exceptions of the rule on hearsay. Hearsay, itself, is not well understood but suffice it to say that it is a statement made out of court that is being repeated in court to prove the content of the statement. Let me give you a quick example: 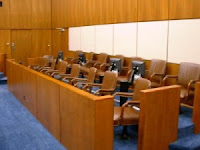 If a Bob says in court, “John called me and told me that Tom was coming over to beat me up,” that would be hearsay if it was offered to prove that Tom wanted to beat Bob up. On the other hand, it would not be hearsay if Bob was using it to explain why he threw the first punch at Tom; because then it would be offered, not to prove Tom’s intent, but to show what motivated Bob to act as he did. Got it? Well, it’s hard and I admit it.
The dying declaration then is a statement by a person dying – now dead – repeated in court to prove that what was being said was truthful, classic hearsay. However, the dying declaration is an exception to the hearsay rule (get out your books, it’s rule 804(b)(2) in the federal rules) but only a limited one. Under the rule it is only applicable to show what the dying person believed to have caused his impending death – nothing more. So it does not relate to property rights or any other matter. It is used primarily prosecutions for homicide or civil actions in which the liability for the death is at issue.
Some states may have slightly different versions of the rule, but if you are writing about it keep in mind what it is and what it is not. It will not dispose of the family farm, trip up a crooked accountant or expose fraud in the boardroom – not in court anyway. And if you have a question or two, there are a few good lawyers around who might answer your questions if you’ll name a character after them, perhaps a distinguished judge
Posted by Mike Manno at 6:58 AM