FOR THE PAST several weeks I’ve been speaking at libraries and schools on the “craft” of writing. So I thought it would be a good time to re-print a column on crafting characters I did for another blog several months ago. This is reproduced from a guest column on the blog “Killer Crafts & Crafty Killers” the blog of Anastasia Pollack, craft editor and reluctant amateur sleuth. It appeared on Friday August 6, 2010:
BOOK CLUB FRIDAY -- GUEST AUTHOR MIKE MANNO
Today’s guest author for Book Club Friday is Mike Manno. Mike is an attorney in Central Iowa where he also teaches law and political science at Upper Iowa University. He lives in West Des Moines with two dogs, a turtle, and a wife. Mike’s newest murder mystery, End of the Line, was just published by Five Star and is available through most book stores and online outlets. His first book, Murder Most Holy was published by Five Star in 2006 and was re-printed in paperback by WorldWide Mystery in 2008. -- AP
Thank you, Anastasia, for the invitation to visit with your fans.
The first thing I noted after accepting the invitation to write for Killer Crafts & Crafty Killers was that I am not a crafter. Now my wife, on the other hand, is a crafter. I need only to take a trip around the house to see her handiwork everywhere. When we met she was a florist, and although she has ventured into the business world of banking and mortgages, she likes to keep her artistic side in practice.

Thus we have needlepoint and plant arrangements throughout the house and in my office, and she often crafts her own gifts for birthdays, holidays and showers. I once saw one of her friends break down and cry when she opened one of Luanne’s gifts to find a miniature replica of her organization’s banner; and if that wasn’t enough, she also has volunteered to decorate our church each holiday.
All of this, of course, makes me feel inadequate to pen a column for a craft blog. Then she (the wiser of the two of us) suggested that I also do crafts: I craft people. And she is right; my craft is creating characters that serve a particular function, just as her decorative arrangements serve to brighten our household. And the more I thought about it, the more I could see the similarities between crafting things and crafting people.
Luanne always starts with a plan and an idea of how her finished project will look. A mystery writer is no different, I always start with a plan (plot) and an idea of how the story will end (whodunit). Now as any crafter knows, things don’t always go right; a color is off or a cut is too short. The crafter then has to either re-do or re-design; same with me. Crafters have patterns; I have an outline. Crafters make adjustments; writers develop new sub-plots. It’s all very similar.
But the most important part of the writers craft is the creation of characters. The best plot cannot overcome cardboard characters just as the best quilt structure pales without the proper accents.
So how do I (or any writer for that matter) go about creating characters that will fetch the attention of the average mystery reader? Simple, the same way crafters get ideas for new projects: we observe. It is almost as simple as that, we become people-watchers! 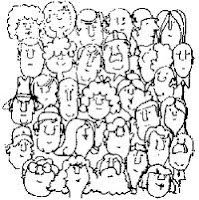 Fictional characters, like real people, are many facetted. Good people watchers know that. A villain, for example, cannot be all bad. There is no depth there. Even the most evil person needs a good side and your hero needs human foibles. The challenge for the writer is how to integrate the good with the bad and balance the conflicting nature within each character, much the same as a florist will accent her arrangement with baby’s breath, bows and greenery.
Then, just as the florist needs to balance the color and size of the flowers chosen, the writer needs to balance the personalities of the characters he or she creates. Does the florist want a bold arrangement designed as an attention-getter, or a simpler one that will complement the event décor? Does our character interact with other characters more or less like himself? It is in that relationship among the characters that will create a harmonious blending of personalities or a tension that titillates the reader. Either way, just as the florist sees the arrangement as part of the event, the writer must look at each character as part of a whole and develop it accordingly.
And the best way to develop the character is through action and words. What the character does and says is more important than anything the narrator can say about him. A good writer, then, will allow his character to reveal himself by his own words and deeds.

Deeds are fairly easy. Words are more difficult. Therefore it is important to allow your character to speak as real people speak which is usually not in complete sentences. If you notice the people around you, you will soon see that most speak in a kind of shorthand that conveys their point while remaining grammatically incorrect. Ask a lawyer friend someday how his witnesses sound when testifying in court. If his are like mine, they sound okay. Then ask how they “sound” from the written transcript of the trial. They’ll tell you that most, even the experts, will sound like uneducated boobs at times.
But that is the way people talk, and a writer must be able to capture that in a way that sounds realistic without adding so many “ohs” and “ahs” that the reader becomes confused. Thus, as many writers do, I spend a considerable amount of time on developing realistic, yet easy to follow, dialogue. Obviously, like anything else, dialogue can be overdone, but just like a good needlepoint, with the proper balance the correct effect can be achieved and your characters will become your readers’ new friends.
Then, if you put this all together correctly you will have a beautiful bouquet and not simply a bunch of flowers.
Happy crafting, from one crafter to another.
From the blog:
http://anastasiapollack.blogspot.com/2010/08/book-club-friday-guest-author-mike.html
Posted by Mike Manno at 10:12 AM