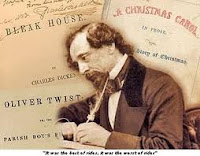 I THOUGHT IT was about time for another report on the Modern Dickens Project, so I asked my friend and fellow author, Kali VanBaale, to send me an update. It took her a bit longer than expected to reply, here’s why:
“We had a weird glitch this month. Turns out our Chapter 6 winner seems to have submitted under an anonymous name, number and email! He used the name “Richard Corey,” which is the title of an Edwin Arlington Richardson poem of the same name (only spelled “Cory”) and also had some hidden references to the poem within the chapter, so we’re still trying to figure out the mystery...
﻿
﻿

“Anyway, we’re about at the halfway point of the contest. Last month our winner was Artis VanRoekel Reis, a judge in the Fifth Judicial District of Iowa and an Adjunct Professor at Drake Law School. Our chapter 5 winner, Chad Cox, is a businessman from Ankeny, Iowa who is also an award winning author and graduate of the Writing, Literature, and Publishing program at Emerson College, and our chapter 4 winner, John O’Donnell, is a teacher in West Des Moines and also a Drake grad.”
Just as a re-cap: remember the Modern Dickens Project is a monthly contest to write the next chapter of a mystery novel. Each month a winner is selected and that author’s chapter is added to the book and the contest moves to the next chapter. For more information on the project you can check out this link.
Here is the story thus far:
Stephanie Ketchum Acuto, or Stikka, is a former MP who served in Iraq. She’s in Des Moines for the wedding of her former lover, Emmy, to another woman. While touring the Capitol dome, she receives a chilling text from Emmy and jogs to her apartment in the East Village to confront her. There, she finds the police and learns that Emmy has been murdered.
As she attempts to solve the case, events take her around the state of Iowa, until she ends up in the Polk County Jail, held as a person of interest in Emmy’s murder. Her gun was identified as the murder weapon and has her fingerprints all over it.
During the course of the novel, Stikka gets mixed up with other interesting—and sometimes shady—characters, including Semezdin Jelenik, a Bosnian immigrant and construction worker who’s suspicious of the building he’s putting up and its possible connection to a military contractor. Semezdin met with Emmy on the morning of her death. And he’s also connected with Emmy’s brother Richard Dunstadt III, the rebellious son of a wealthy insurance family. He insures drug-running jets, was involved with Emmy’s fiancé before the two women met. 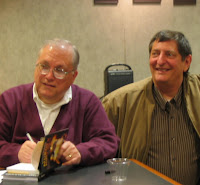 There’s more, of course, and you can check it all out by following the link above. Modern Dickens is supported by the Iowa Arts Council.
***
On another note: Many thanks to the folks from the West Des Moines Friends of the Library for hosting a great event for me Tuesday night. It was great meeting new friends and old friends and even a few friends of my mom who attended. The company and the goodies served were great. Thanks, guys!
Posted by Mike Manno at 7:25 AM