TODAY WE’RE VISITING with my good friend, Dennis Collins. Dennis and I met several years ago when we were both aspiring mystery writers and by now we each have two published books to our credit. 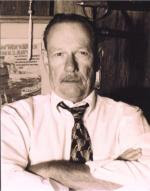 Dennis was born into a show business family. After attending parochial schools including the University of Detroit, he moved on to the auto industry where his career in manufacturing engineering helped to finance a lifetime of adventurous interests. His avocations so far have included skydiving, motorcycle racing, flying, scuba diving, and over thirty years as a professionally licensed hydroplane racer. Dennis is the father of six children and an ever growing number of grandchildren. He lives on the shores of Lake Huron which provides him with just enough solitude to foster his newest career as a mystery writer.
Mike: Okay, I’ve known you for a number of years now, since before either one of us was published, but I never knew about the “show business family” stuff. What is that all about?
Dennis: Both of my parents were entertainers, they met while working on the same radio show. Mom was a singer and dad was a musician. After the kids came along my mother became a stay at home mom and my dad continued to tour with the big bands like Whiteman and the Dorseys. He was a guitar player but when he was with the Art Mooney Orchestra they needed a banjo for a recording date and my dad jumped in. The song was “I’m Looking Over a Four Leaf Clover” and it hit number one on the charts.
M: How did you make the transition from engineering to murder mystery writing?
D: I’ve always wanted to write and used to regularly be in the doghouse with the nuns in the fourth grade for writing “violent” things. It’s just something that evolved. And you don’t need special credentials to write fiction.
M: You write your mysteries in a police procedure style, how did you come to choose that style since you have no background in police work – or do you?
D: I’ve never personally been involved in police work but several of my high school buddies moved into that field. I’ve also counted many police officers among my friends. I like sitting in on their gab sessions and picking their brains.
M: You have some great characters in your books, especially the Detroit police officers Otis Springfield and Albert McCoy. How did you develop them and are they based (loosely or not) on real people?
D: Actually both of those characters were based on movie actors. McCoy is Brian Dennehey and Otis Springfield is based on Carl Weathers (Apollo Creed from the Rocky movies). At least those were the images in my head as I developed the characters.

M: Both your novels, The Unreal McCoy and Turn Left at September are based in and around Detroit. I’m interested in knowing how much research you need to do to keep all the “location details” correct?
D: Several of the locations that I’ve referenced no longer exist but they were all there at one time. I grew up in Detroit and worked a co-op job as a delivery boy in the downtown area while I was in high school so I knew my way around the center of Detroit pretty well. Some things have changed so I find myself constantly visiting so that I don’t stray too far from fact. I try not to get too specific.
M: Most readers are interested in the writing process, so can you explain yours? Do you outline? How much of the plot do you need to know before you start writing? And once you start, how long does it take to complete a manuscript?
D: I’d describe myself as unorthodox. I usually start with a tiny germ, sometimes just a sentence or a phrase and build from there. I’ve never been able to write an outline because I usually have no idea what the story line will be until I get into it. In The First Domino, I started with discovering that my uncle who was missing in action in World War ll had posthumously been awarded a medal for bravery and the family didn’t know it until 2006. That was my germ and I built a back story around it. Then I had to create a mystery story to support my back-story. It was a genuine adventure writing that book. I’m very proud of that manuscript.
M: What is next for Otis and McCoy? I know you have a new manuscript, The First Domino, making the rounds of agents; does that story follow the same characters? And do you have any word on a publication date?

D: My stories feature three main characters and I’ve tried to give each of them an opportunity to step forward in a featured role. The First Domino is Otis Springfield’s chance to shine. McCoy and Michael O’Conner are there as a supporting cast. At this time I am in discussions with a publisher who liked my query, requested more information, and eventually the full manuscript. The acquisitions desk likes the story and so we’re talking and that’s where things stand for now.
M: In addition to writing, I know you review books for MyShelf.com. Is there any advice you can give to newbie authors about getting their work reviewed? And approximately how many books do you review each year.
D: I also serve as a columnist at MyShelf and I’m expected to review one book per month. When I’m not busy writing I try to give the three or four reviews. It requires a lot of reading and I read every word of every book that I review. I’m guessing that I submit 15-20 reviews a year. I’m not sure what the procedure is for submitting a book for review at MyShelf but I know that networking helps. I’d recommend attending conferences and joining internet forums. Get your name in front of people and don’t be afraid to ask a reviewer to look at your work. I once asked a newspaper reviewer to review one of my books but he stood there with his hands in his pockets as I held the book out to him. I stuck the book under his arm and told him that it was a gift and he could read it or throw it away. A month later there was a starred review in the newspaper. 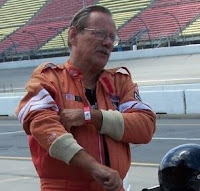 M: Is there any website or contact information you’d like to mention? How can readers get in touch with you and purchase either of your books?
D: My first book, The Unreal McCoy is currently out of print but I’m looking at options to resurrect it. Turn Left at September has had a decent run and the contract is approaching expiration. It continues to sell through most online outlets and can be ordered from any book dealer.
My website is: http://www.theunrealmccoy.com/ and there are links to both my blog and my Facebook page. There is also a contact link and I love hearing from people. I answer all of my email.
M: Thanks, Dennis. Good luck and I hope you hear from a lot of new fans.
You can also read Dennis’ columns and reviews at MyShelf.com.
Posted by Mike Manno at 7:21 AM

“… an entertaining thriller with fast-paced action and quirky characters that will have you turning pages in anticipation of the next event.”