Thoughts on the Papal visit of 30 year ago 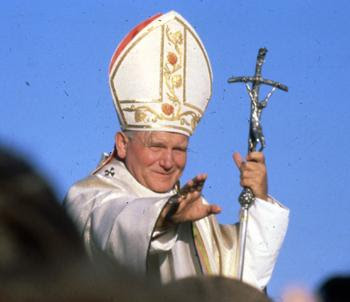 ONE OF THE HIGHLIGHTS of my life occurred 30 years ago when my wife and I – along with about 350,000 others – attended the Mass celebrated by Pope John Paul II at Living History Farms just outside Des Moines.

We were living in Davenport at the time and drove in for the event. After spending the night at my mother’s in Windsor Heights, we walked (and walked) to Living History Farms early the morning of October 4, 1979. I remember it as a cold, damp and drizzling day, but no one at the site seemed to mind. We found a place near a bunch of kids holding a sign saying “We Lutherans Love John Paul Too!” and settled in for a long wait.

Mid-afternoon there was a sudden clearing of the clouds and the sun shown through just as the presidential helicopter carrying the pontiff circled overhead and landed. Out came JPII and the rest, shall we say, is history.

This past weekend the diocese of Des Moines, as part of a celebration of the 30th Anniversary of the trip held a symposium on land use and stewardship at Dowling Catholic High School in West Des Moines. The weekend kicked-off with an interdenominational prayer service at the site of the pope’s mass at Living History Farms.

My friend, Kathie Obradovich, political columnist for the Des Moines Register, asked in her column this weekend if a return trip by the current pope would result in the same excitement. “Pope Benedict XIV filled Yankee Stadium in New York City last year, but could he attract a crowd six times that size in Des Moines?” she asked.

We’ll probably never have another pope visit Des Moines, so that question will never be able to be truthfully answered. But I have a feeling he would; people today seem to be searching for something more than the here and now. The pope represents that. And so if he does come, I’ll look forward to seeing my 350,000 friends again.
Posted by Mike Manno at 1:38 PM