Mondays With Mike: Robert Bennett and the Blind Protagonist

ROBERT BENNETT WRITES from a unique perspective; he has Spina Bifida, and writes books about a blind protagonist from his wheelchair.  He describes himself as a social worker turned writer who lives in the house he grew up in with his mother, one of his brothers, two dogs and a turtle.  Since I live with two dogs and a turtle, I liked him immediately!
He has a degree in criminal justice and masters in social work.  “My lifelong focus has been a concern for the needs of society’s disenfranchised,” he says.  He has written numerous articles on topics from sports to technology and from politics to social justice.
Mike:  Welcome Robert.  First, let’s start with Spina Bifida, most people don’t know much about it, can you describe the disease and what some of the limitations are? And how did you end up in a wheelchair?
Robert: Spina Bifida occurs when the fetus is growing in the womb and its spine doesn't form correctly (a neural tube defect). Some of the vertebrae (bones in the spine) don't close to make their normal ring shapes around the spinal cord. The opening that results causes one of three types of spina bifida: occulta: a tiny opening, usually causes mild or no symptoms; meningocele: a big enough opening so that some of the membrane surrounding the spinal cord sticks out through the opening; myelomeningocele: the most serious kind, in which some of the spinal cord itself sticks out through the opening in the spine.
I was born with the third form, though I was extremely fortunate that, up until my car accident in 1988, I suffered from very few symptoms. You see, the type of symptoms the person has depends on where along the spine the opening occurred, since that is where the spinal cord was injured. My lesion is very low down my spine, at my tailbone. The accident, though, exacerbated a previously unknown symptom, a tethered spinal cord. Before then, unbeknownst to anyone, the cord itself had been connected to the vertebrae by scar tissue. The jarring action of the accident caused the entire system to yank and eventually start dying.

I was in and out of the hospital a lot when I was quite young, but rarely since then and never related to this condition. I had trouble learning to walk and ride a bike as a child, but I did walk without aids (until the car accident) and I did ride a bike. My walking balance was never wonderful, but I managed it well. I never suffered from any mental challenges, though many others do.
M: How did that disability affect your writing?
R:  While the Spina Bifida itself does not affect my writing, the loss of use of my legs as a result of my accident has helped me to understand not only disability but the process of grieving, loss, and adjustment associated with disability. Disability in general is what my writing has always been about. From the beginning of my writing career, 17 years ago, I’ve been trying to provide information, help, and encouragement to the disabled community. And, I’ve tried to help the able-bodied community to understand disabilities and the fact that the two groups are not as distinct or diverse as some would espouse.
M:  Let me turn to your blind protagonist I referred to above; what have you learned and how difficult is it to write about a blind person? 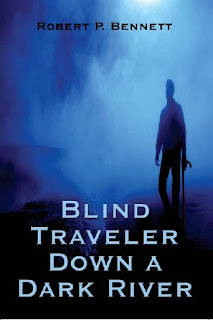 R: Blind Traveler is/will be a series of novels. Individually, each of the first set of stories will explore the four remaining physical senses of the protagonist, a blind man. Contrary to what many people believe, those who lose the function of one sense do not somehow become “super” in the other senses. Instead, they learn how to become more reliant on the remaining senses.  I learned a lot about the ways in which blind people live their lives by interviewing a large group of them. I paid attention to how they move through the world, how they define what they feel, taste and smell. I asked a lot of questions. To me, the job of an author isn’t writing what I know, but rather writing about what I can find out.
M: Can you give me a sentence or two about each of the books?