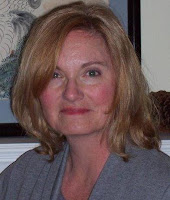 By Robyn Gioia
When I originally started this thread on eBooks, I thought I’d chat a little bit and move on. I referred to the eBook trend as a tsunami (no disrespect to Japan) rolling over the publishing industry. The onslaught has and is quite literally bringing in a world of change. There is so much going on, I can barely keep up with the changes myself. It’s quite literally one of the hottest topic out there and worthy of all the news. 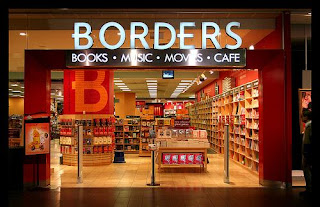 Many of you have heard about Borders, the mega bookstore that filed for bankruptcy. It’s closing many of its underachieving stores, including the store next door to me. Since Amazon reported eBooks have overtaken paper books in sales, it’s no wonder a store selling only one type of product is suffering. If a store today is to survive, it will have to morph into something different. I read where one independent bookstore owner has turned her store into a community center. The customers come in for coffee, chat with friends, discuss books, review titles, and keep up on the latest news in the book world. Sort of a book gossip center. She says business is up despite the changes in the industry. In the future, I envision more of this and bookstores offering download kiosks for eBooks at specially bundled prices; gems you wouldn’t normally hear about or find on the internet. Sort of sounds like TV cable, doesn’t it.
﻿
﻿

I’ve learned a few more things about owning an eReader. My husband and I flew to New York for a day. He brought a large, bulky, hardback book, and I brought my Kindle which fits nicely into my purse. Because I had a meeting to attend, he thought he would bring his book along to read. Turns out, he had time to walk Times Square instead. Who is going to read a book when visiting New York? Anyway, he ended up lugging his book around with him without reading one word. He carried it through the museum, on the subway back and forth, into the restaurants, the Hershey store and every single place we went. Needless to say, it turned out to be a nuisance instead of a source of entertainment.
On our return home, he spotted a new David Baldacci book at the airport. He stood there reading the cover trying to decide if he had read it. Turns out he hadn’t. While standing in line to pay for it, he asked me to check the price on my Kindle. I pulled it out of my purse, and checked the online bookstore right there in front of a line of customers. It was the exact same price. Despite the annoyance of carrying the other book throughout the city, he decided he would rather read his new book in paperback form, so he went ahead and purchased it. I was secretly glad too because I didn’t want to share the Kindle on the way home. I was in the middle of my own book.

There are changes taking place in the digital book world almost daily. Barnes and Noble’s eReader the Nook, can do color, the iPad can show picture books, and interactive books are being perfected as we speak. Feeling left out? Your phone can be turned into an eReader too.
I mentioned before that my students have been reading Tom Sawyer on their eReaders. One of my students had to take her Nook in for service this week. She was upset too because she has all her notes recorded on it and every vocabulary word sticky-noted. Come to find out, because it’s a touch screen, too many fingerprints on the screen keeps it from functioning properly. One of my other students had to take her Nook into the shop where it was replaced. The Kindles in the room have not suffered the same fate. Probably because they aren’t touch screens.
My daughter came home last week and announced she was going to purchase a Nook. The touch screen is more intriguing than the simple menu on the Kindle, and she wants to borrow library eBooks. We stopped by the kiosk at Barnes and Noble to look it over. The first thing the salesman pointed out was how the Nook can download library eBooks and the Kindle can’t. He knew exactly what we wanted to hear. My daughter was tempted to buy it that minute, but she decided to wait a week so it wouldn’t be an impulse buy. Good girl. To be fair to the Kindle, I’ve been told that a Kindle user can request the app to download library books from Amazon but I haven’t done it yet. Why Amazon wants to lose sales that way is beyond me. 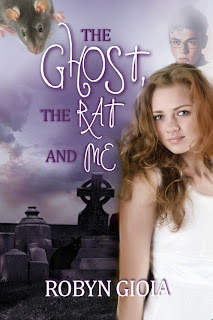 On a personal note, I’ve had two eBook publishers interested in my middle grade mystery. I don’t know what I’m going to do yet. I may publish it myself since the rules are changing and I’ve been reading how some big name authors are going the same route. The whole thing will require some thought. The book isn’t up and running yet, but I would like to give you a sneak peek at the new cover. When I showed it to my class this week, they gave it a huge thumbs-up. If it had been available that moment, a lot of the class would have downloaded it on the spot. Hopefully it’ll be ready to launch sometime in early summer.
Until next month, take care, and happy reading.
* * * * *﻿
Robyn is the author of, America’s REAL First Thanksgiving, St. Augustine, Florida, September 8, 1565, and the forthcoming novel, The Ghost, The Rat and Me, for an ebook publisher.
Posted by Mike Manno at 7:05 AM